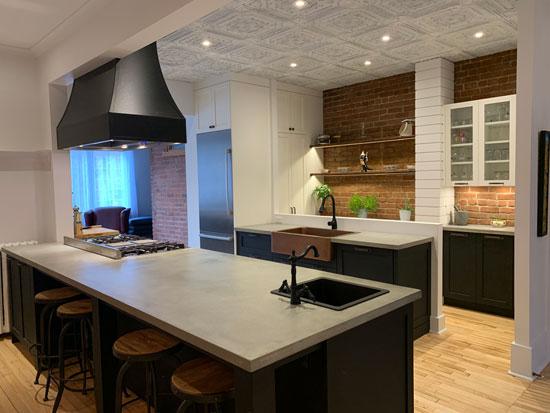 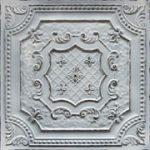 " Complete renovation of a 50 years old kitchen in a 100 years old house. This is why we chose the old Victorian look for the ceiling. They look like real old metal prices for a reasonable price! Super! Great service and product is as expected! People who visits think the ceiling tiles are authentic and in metal so it's a really great product!"
- Patrick St-Onge 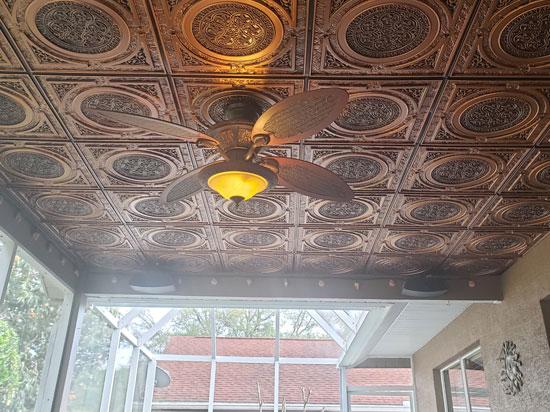 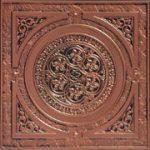 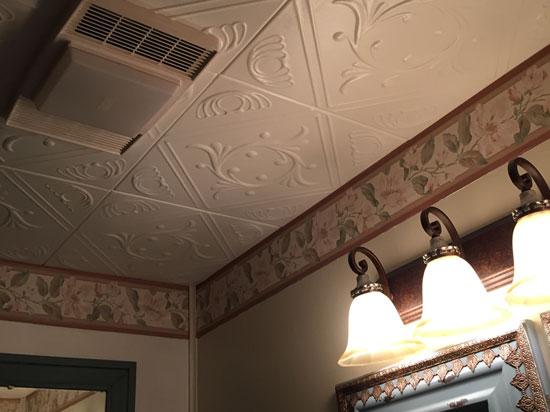 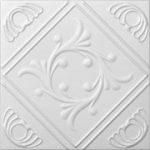 "This project was installed on a 9ft. high ceiling of a Victorian Bathroom. The ceiling needed to be tied in with the victorian theme for my Victorian Home used for weekend lodging. I first painted the bare white ceiling tiles with a latex satin paint (Marshmellow White) after drying time, I began in the far right corner of the room, and placed the tiles as instructed with the recommended glue purchased for the project. The install was easy to cut pieces, fit together at seams and easy to match with hardly any waste at all. This product was very easy to work with and is of outstanding quality. Clients have commented how beautiful the ceiling looks and blends well with the decor in the victorian bath/spa. I have recommended the project to many of my friends with victorian homes, as this product is a great way to keep the character of the home alive. Great experience, as I loved the way the product arrived neatly boxed and there were no flaws, breaks or damage of any kind."
Tips: Follow the instructions and all will go well.
- Sharon McDuffey 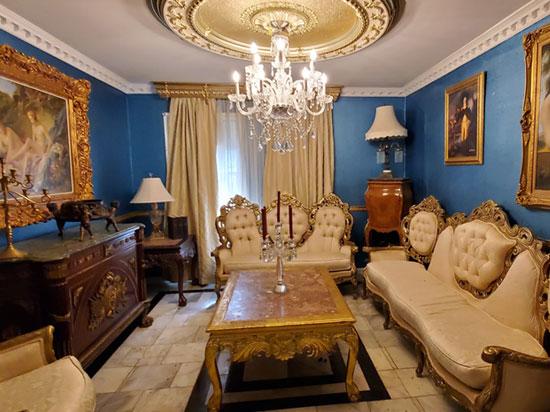 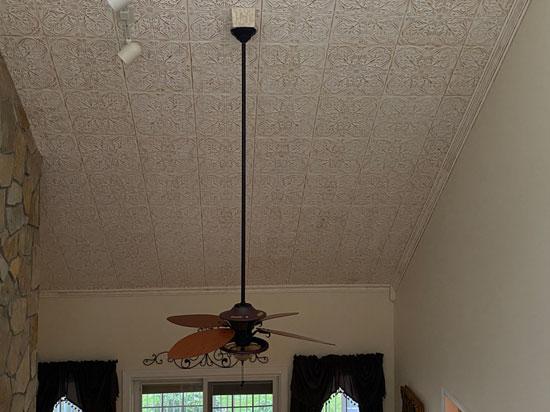 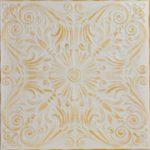 "Our open vaulted ceiling that encompassed the second floor open floor layout. It went from 8 ft to 25 ft to peak with a second small vaulted ceiling that had drywall cracks from settling and the heat/cold temperatures through the seasons. This project was a very large project to take on since it was only going to be my husband and I doing the labor. When we found Decorative ceiling tiles online, this answered our first question which was what could we use on the ceiling that would be manageable for the two of us at such high heights. Milan and everyone that I talked to were just great. They helped us through our planning stage to working through questions as the project progressed. We were able to rent scaffolding and had a great neighbor that provided the second scaffolding to accomplish this project. The ceiling had a peak where the large vaulted section met the smaller (2nd Floor) section. Milan was great with his suggestions on where to start with this type of ceiling and also how to finish the peak where the two section ceiling tiles met. We had to tile around two skylights which with Milan's help had no trouble. We added L molding and had bought the Gold touch up paint to do a dry brush on white and it matched great with the tile. The can lights and fan did not present any problems, just removed them, tiled and then put them back up. The whole project took us a day less than two weeks. We also bought a medallion to add to our entryway, which added so much to that area. We love our new ceiling and very proud with what we accomplished. Decorative ceiling tiles was great. They were there through the whole project. This company and the owner really cares. They are not just about selling the product, but they really want you to succeed. It is one of the best companies I have ever dealt with!"
Tips : It is important for you to mark the center of the ceiling with blue chalk to ensure that the ceiling tiles will continue to stay straight. This type of project has to have at least two people due to the height. It takes at least two people to build the scaffolding and tear down as you move down the ceiling from the peak. It makes it so much easier if someone is gluing and handing the ceiling tile to the other that is installing. Measure and triple check your measurements for cut pieces (We were proud, we only messed up two ceiling tiles). Keep your cut pieces for places you need additional cuts, it saves product.
- Denise Greig 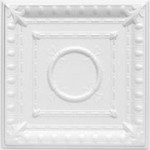 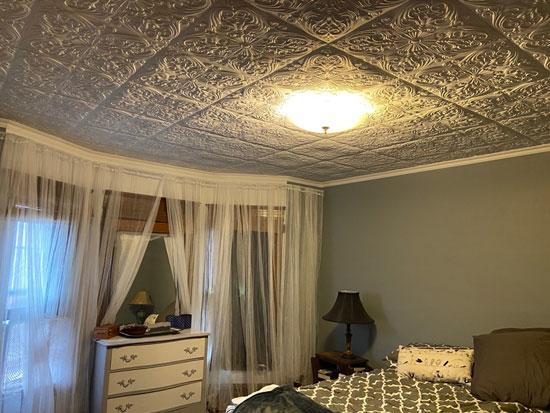 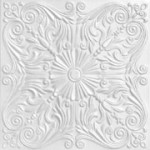 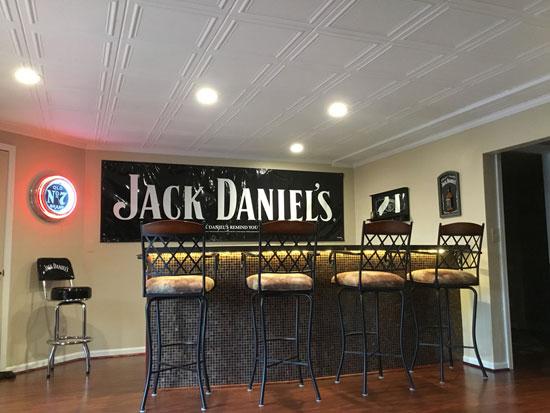 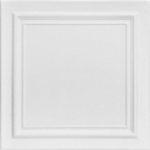 "1000 square feet of a textured ceiling. First time ever doing a tile job of any kind. Not pictured is the rest of the project as this area of the basement is the most decorative. Plus the whole basement is too big to cover in one photo. It was easy to do easy to cut and easy to install even for a first timer like myself. 1000 square feet was not easy to do but once I found center and snapped chalk lines and installed the first rows in either direction it was easy after that. Absolutely perfect, very nice and professional to work with. Received a discount on the tile and adhesive. Shipped out fast and the tiles were all in perfect shape."
Tips: Make sure you have at least 2 chalk lines going in either direction, find your center and got from there. Take your time and use the adhesive they recommend, it is great. Other than that it was a lot of work but fun. I chose to paint the tiles myself and did small areas at s time b/c it is a long process to paint them correct. I also recommend a hot knife and a straight edge to cut the tiles. It works far better than a razor blade. Perfect clean cuts every time.
- Tim Gallison 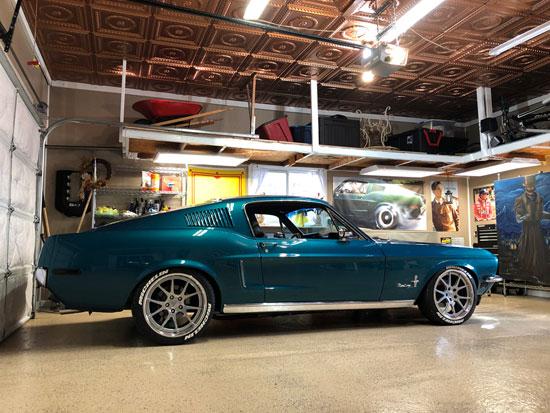 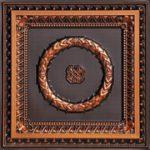 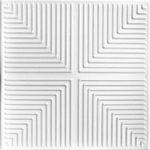 "This room is a combination Beatles room and craft room. My Beatles memorabilia is in 2 rooms and parts of others. I love this area and the cool ceiling is just the frosting on the cake! We live in an old house. It’s the house my hubby grew up in. Some of the ceilings are plaster and some had old 12x12 ceiling tile. The styrofoam tiles, which are easy to install by gluing to the existing ceiling, give an updated look to a tired room. I think our house will always be a work in progress. Great service and quality product! What more could you want!"
Tips: I painted the tiles before we put them up. We ran chalk lines on the ceiling to keep seams straight. After carefully installing, I caulked the seams—a little time consuming, but well worth it! We liked it so much, we have it in a small bathroom.